This soup is sooooo delicious!

Okay so I was wrong, the easiest dessert recipe in the cookbook is NOT the cranberry and apple kuchen! It certainly takes less ingredients and efforts to make this creamy walnut soup. The concept of having warm, creamy and nutty dessert soup sounds extremely comforting in the winter. And if you want something that’s not too sweet and overwhelming for dessert, this is definitely an excellent choice.

Although it was supposed to be simple, it still took me about 50 minutes to prepare. I prepared the soup even before I started prepping for the first and main course.

First I toasted some walnuts on a large frying pan. Walnuts are delicate, so I had to keep tossing and flipping them in the heated pan. Oh well it’s okay… I love showing off my flipping skill with frying pan anyway! Hahah… Oops despite being careful, I was reaching for my glass of wine for a sip, (Yes, of course I drink when I’m cooking… Don’t you?) 5 seconds later I saw a couple burned pieces in the pan. Yikes… I quickly removed the pan from heat. 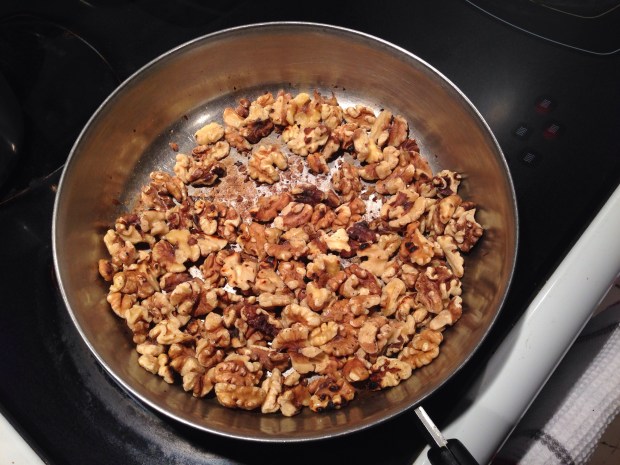 Then I rubbed any excess skin off the nuts, chopped them a little finer and added them to a saucepan with the cream, milk and vanilla. It was my first time to use vanilla beans. I bought them at Whole Foods. They looked beautiful and delicate in a glass tube. I only used a quarter of one bean, scrapped off the seed into the pan, and dropped the pod in as well. And I simmered the whole mixture for about 45 minutes on low low low heat. 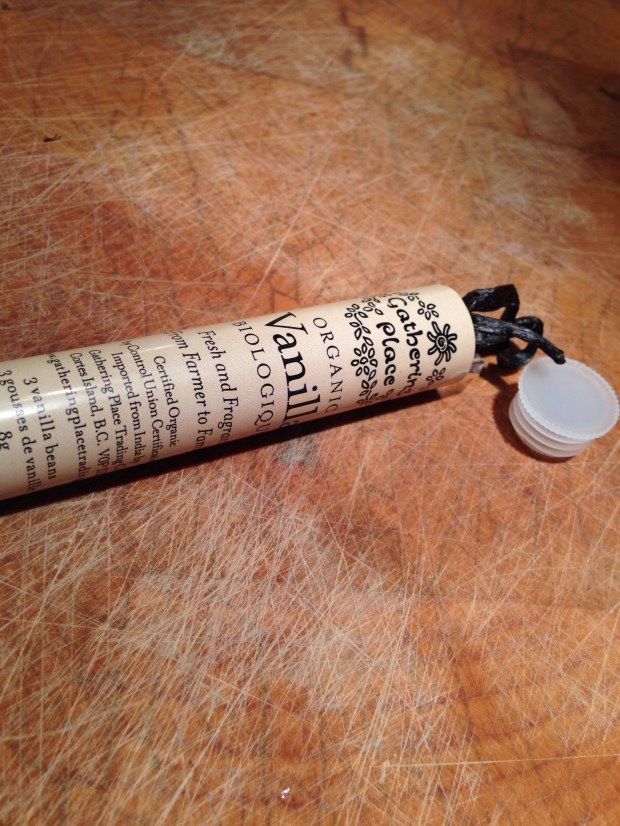 While the the cream was simmering, I prepared the poaching liquid for the poached pear – wine, water, sugar, and lemon juice. I only used half of the amount of described in the cookbook, including only half bottle of white wine. I was going to drink the other half for dinner later of course! I cored, skinned and slice a large bosc pear into 8 segments, and poached it in another saucepan with the poaching liquid for about 20 minutes. 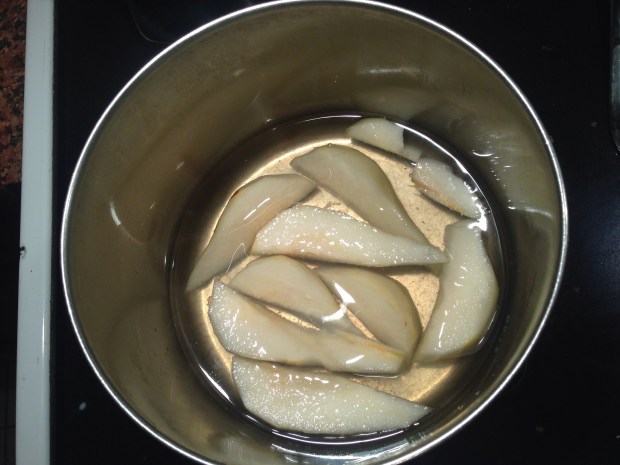 When the pear slices were soft enough, I turned off the heat. I waited till the cream and walnuts were done, I put the pear slices in the blender with one-third cup of the poaching liquid, and pureed it. I added the hot mixture of walnuts and cream into the blender, and let the blender blade running combine all the goodies together, for about 5 minutes. Then I use a China cap to strain all the liquid. I collected about 1 and 1/2 cup of liquid.

I let the soup sit in a small sauce pan, and I was off to play mahjong with Morgan, his parents, and my mom.

Once we were ready for dessert. I heated up the soup a little bit with low heat, and poured them into those cute soup cup I bought from Daiso! Then I drizzled some French walnut oil (from Whole Foods and it was on sale!), and garnished with a couple pieces of chopped walnuts.

I served the soup with a slice of pear on the side. I drizzled some balsamic glaze on the pear and garnished it with chopped walnuts as well. You guys should know by now. Presentation is SUPER IMPORTANT to me. 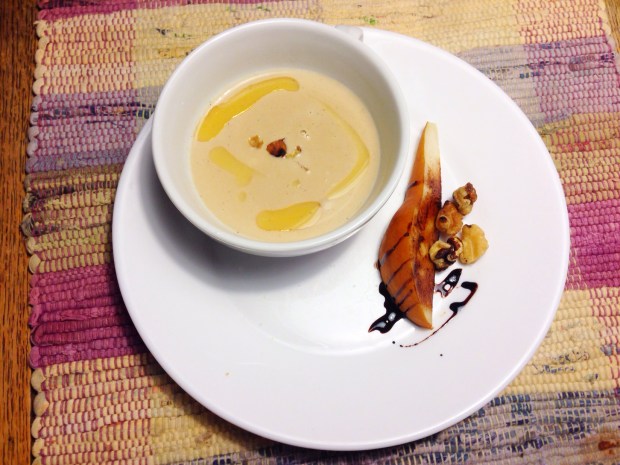 The soup was divine. That was the first word I could think of… It was smooth, creamy, and aromatic. The sweetness was subtle and soothing. The additional touch of walnut oil added some nuttiness, and it was great to have a tiny bit crunchy texture from the chopped walnuts as well.

I started getting worried that balsamic glaze would overpower the lightness of the soup, but it did not. The flavour pairing was perfect, it just added another acidic dimension to the creaminess.

Wow, I have to make this more often!

How to make Poaching Liquid