This Cheese course is incredibly simple among all the cheese recipes in the cookbook and it tastes truly amazing.

After signing up for a fun afternoon of mahjong with my mom and the Redman family, and I also offered to cook dinner for all of us. Another 6-person dinner gig – I would certainly pick a couple recipes from the French Laundry Cookbook. But since I would not get all afternoon to prepare, I decided to just do a first course and a dessert course from the book, and come up with something quick but fancy for the main.

The final dinner menu definitely seemed less elaborate than any of my previous French Laundry dinners. The shopping did not take too long, despite having to drive to the city for Whole Foods. But thank goodness, Save On Foods and BC Liquor Store were both merely a couple minutes of walk from Whole Foods.

Here are all the ingredients I bought for the whole dinner! So let’s get back to our first star of the evening: Whipped Brie de Meaux en Feuilleté with Black Pepper and Baby Mâche.

I never realized the importance of cheese in the western culinary world until I moved to North America, considering back in China most of the dairy products were either milk or yogurt. And for a while, I thought most cheeses were orange like the kind they put in a cheese burger. One time I discovered cheese in white powder form during my my high school days in California, when I was home staying at an American family, where they fed me pasta with tomato sauce and Kraft Parmesan cheese from a huge shaker, which I found quite intriguing – the Parmesan shaker reminded me the little bottle of soy sauce on the side for a Chinese daily meal, a great flavour enhancer.

I have enjoyed different types of cheese over the years, but they have been mostly in their original form and consumed along with wine. The French Laundry Cookbook has a whole section on how to make eating cheese a lot more fun by transforming it rather than just cutting it and putting it on a cheese board with some grapes. 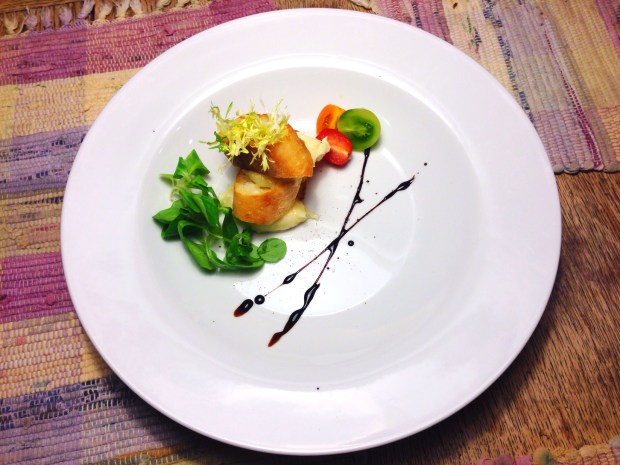 I left the mahjong table at 6pm, and I quickly sliced the baguette, drizzled some olive oil, put in the oven. While the croutons were in making, I took out the brie that I put in the freezer 3 hours ago.

Okay did I mention this dish was easy to make? But still, I couldn’t have done it so quickly without a couple shortcuts. Big thanks to Robbi’s KitchenAid Artisan Stand Mixer, which had made whipping the cheese so fun and made the final product so fluffy and beautiful. The Normandie Double Cream Brie I bought from Costco was a really good deal. For a recipe for 6, I only need to use 3/5 of the whole thing. Freezing the cheese definitely made the cutting off the rinds a lot easier. Oh the rinds made such yummy snacks and I kept eating them when I was cooking. 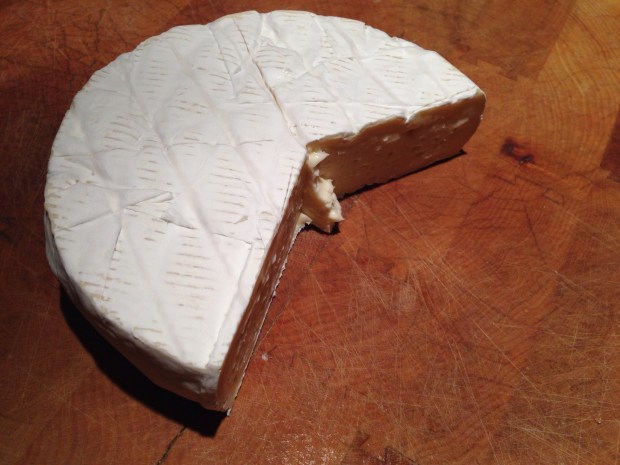 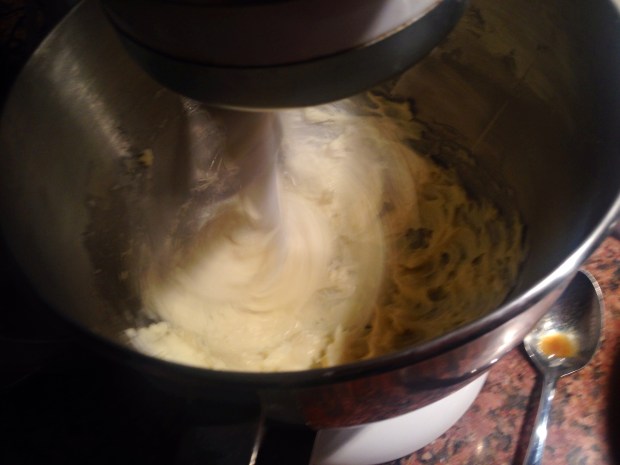 The 2nd shortcut was the balsamic glaze that I made a week ago for the salad of black figs salad. It certainly always comes in handy when you have a squeeze bottle of balsamic glaze in the fridge, you can use it for salad, soup, or even main course as a flavour component, to enhance flavour or to add some artistry to your plating.

However I didn’t do a good job slicing the baguette. I had to admit my mind was elsewhere and the image of Carol’s dish completely replaced the original image from the book. Errrr…. Well the croutons turned out to be too thick, and visually I was so not satisfied. But it was not all that disappointing at the end – the portions of brie Quenelle was pretty big, so the giant croutons did help a little bit or the whole cheesy bite would be too rich.

There were a couple ingredients I had to get it at Whole Foods: Fleur de Sel and Baby Mâche. Thank god there was enough Baby Mâche in one box of Organic Baby Mâche Sweet Mix for 6 portions because I really didn’t want to spend $12 for a little bunch of greens on each plate. Fleur de Sel did taste a bit sweet and more subtle compared to regular salt, definitely the fanciest salt that I had every used. What I couldn’t get was Tellicherry pepper, which was supposed to be a type of black pepper corns that had a more intense flavour. People at Whole Foods said they never heard of it, so I assume I wouldn’t be able to find it anywhere else in the city.

Frisee and baby heirloom tomatoes were my personal touches to the dish.

So the first course for the evening got some raving reviews. The Redman family and my Mom really loved it. They did not seem to bothered by the giant croutons. Or maybe they were just too polite.

We were off to a good start. And the main course dishes were put together pretty quickly. Veal jus had been made from reducing veal stock along with a bit red wine, shallot, and garlic even before I started mahjong, and fennel oil was already made and ready in a squeeze bottle a couple weeks ago. I quickly seared the steaks in a large pan, and tossed them in the oven to finish. And I did a quick pickle on the sliced radishes with a mixture of some of the poaching liquid I made for the poached pear for the dessert, and some white wine vinegar. So it took me less than 30 minutes to get the main ready. 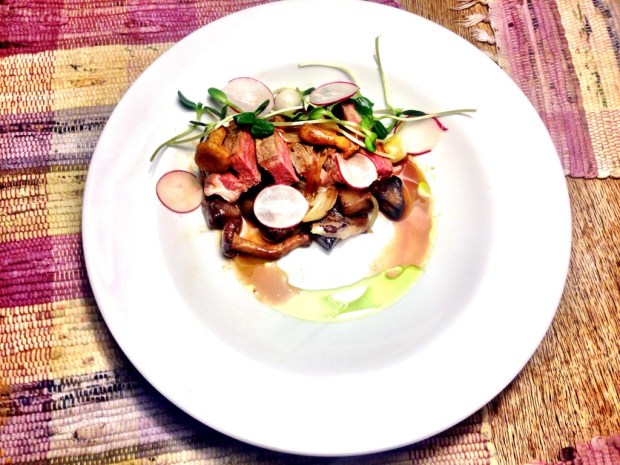 Finally, the dessert! And I will leave it for the next post!