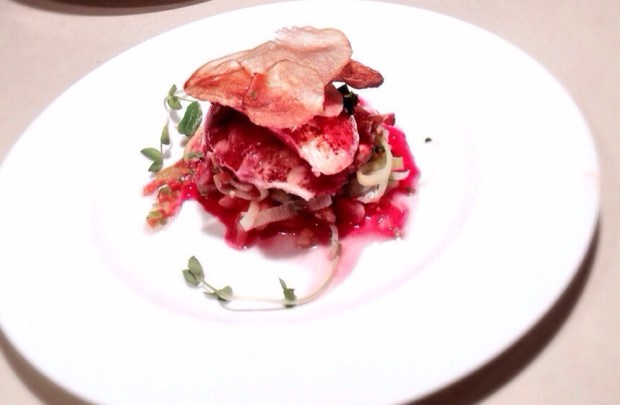 Lobster for thanksgiving. Why not?

I know it’s important to adapt to the local culture as an immigrant. But for years I did not celebrate Thanksgiving or Christmas. Those are the holidays for family gathering, and in the past many years all my family and relatives  were across the Pacific.

Last year I had Vietnamese hot pot with my friend Jenny, Justine, and Graham for thanksgiving and it was a lot of fun. We certainly don’t have to cook a whole turkey to be thankful! And it was my mom’s very first Canadian Thanksgiving, so I wanted to cook her something that’s beautiful and more refined.

When I picked this recipe out of the The French Laundry Cookbook, I thought it looked pretty simple. But boy was I wrong. It was easily the most elaborate dish I had ever cooked! And I wish I had a couple extra hours to prepare. Nevertheless, I did it and learned quite a few French cooking techniques:

Beure Monte
I had only use clarified butter to poach lobster before. The idea of beurre monte is really intriguing – a few drops of water and chunks of butter whisked over moderate heat, instead of the melting butter directly, which maintains the emulsification of butter fat and water. Poaching lobster between 180 and 190 F, the meat will be harder to overcook and it keeps the meat tender, moist and flavourful.

Pommes Maxim
Basically it is paper thin Yukon Gold potato slices coated with clarified butter, placed in overlapping circles, and baked in 300F oven for about 45 to 50 minutes. I did not have a Silpat as instructed in the cookbook, and I put the circles of chips directly on a baking sheet, so it was a little difficult to scrape them off after they were done. But I managed to have a couple pieces that looked somewhat decent.

Brunoise
The fancy tiny dice of blanched carrots, turnips and leek greens, which provide some bright colourful details to the component of leeks in the lobster dish. In the restaurant, they usually prepare large batches of brunoise and store in the freezer. I did not know if I actually had achieved the 1/16-inch dice, but it took a lot of my time trying to cut those vegetables. I felt like I was getting my knife work training at a cooking school. 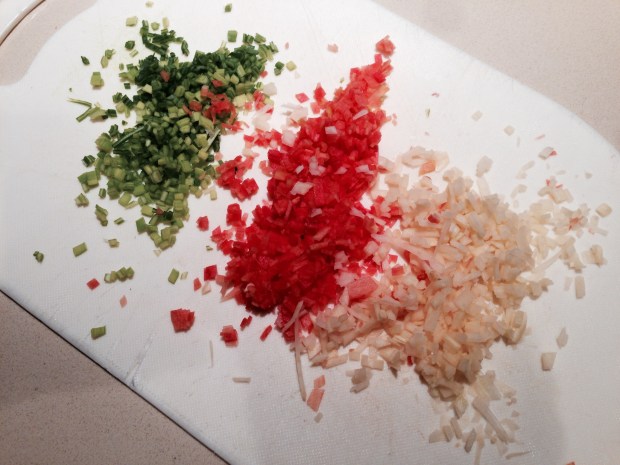 Tomato Diamonds
This is a lot of work too. Tomato needs to be peeled and quartered. All the interior and ribs must be cut away, leaving only the pedals. Then cut the pedals into 1/4-inch diamond shaped dices. However, this took a lot less time than brunoise. Thank god!

Time to finish the plate.

Beet Essence
I forgot to look for beet juice, and was only able to pick up some beets at the market. I don’t have a juicer either. So I ended up roasting the beets, and tried to blend them and extract some juice. But It was a mistake. The cooked beets produced juice with lighter colour, and it was not thick enough to be reduced to the consistency desired. Nevertheless, I whisked the reduced beet liquid with beurre monte and it was the sauce that formed the bottom layer.

Leeks
The Leeks, as the main vegetable component, was cut into thin rounds, blanched, shocked, drained, and warmed up in beurre monte along with brunoise and tomato diamonds. And it was placed as the 2nd layer.

Lobster
The lobster pieces was fully covered and poached in beurre monte fro about 5 to 6 minutes on low heat. I placed half of a tail and a claw as the 3rd layer of the plate. 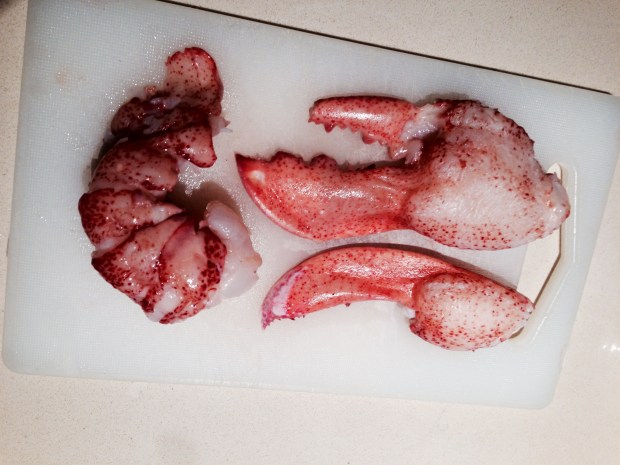 Pommes Maxim
was the last piece placed on top of the lobster and completed the plate as the final layer. 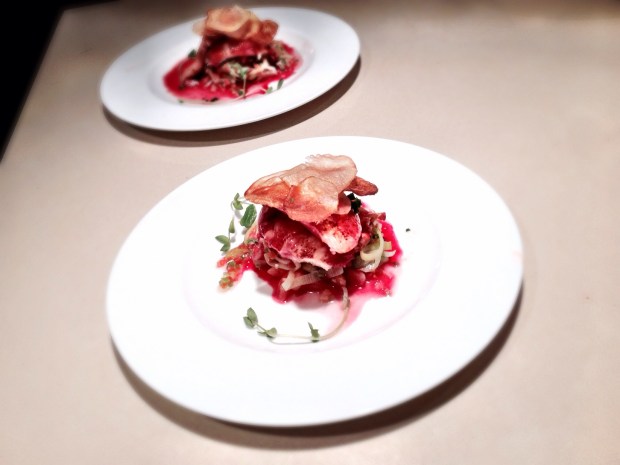 I felt bad that it took us over 3 hours to cook and finish eating this 2-course meal. Mom however really enjoyed the lobster and I couldn’t help smiling.

Wow what have I got myself into? I took another look at The French Laundry Cookbook sitting on the kitchen counter. This is only the beginning…Bigger challenges are well on their way.