Erin met James in Scotland when she lived there, and the romance has continued in Vancouver since James moved here a year ago. I really wanted to do another meat dish for their dinner party, but the choices were too exotic for Erin – she was not a big fan with any gamy meats such as lamb or veal. She is also not much a seafood eater but would eat some types of white fish or salmon. But it was James who gave me the inspiration. The Cod Cake recipe from the French Laundry Cookbook is an interesting interpretation on this common dish in Britain. But the twist is, this is also presented as deconstructed clam chowder. Okay I guess this is not a perfect world, and I can’t completely avoid Erin’s dislikes, but she was okay with ignore the single piece of clam on her plate.

It turned out to be another elaborate dish – very detail-oriented steps and a lot of components. The cod cake also required to be made and frozen several hours ahead. So I had to make the cake logs the night before. But at the end, it was all worth it.

Despite it was quite an elaborate dish, the ingredients were pretty easy to find. Fresh pacific wild cod is one of my favorite things to buy at Costco, and I cook them quite often. The beautiful white meat of is fresh, delicate, and sweet, and it could be steamed, pan fried, and baked. Fresh clams can be found at any Asian super market here as well, and they make such delicacy without putting into too much effort. In this recipe, I only needed 6 large clams which to my surprise, would produce such amazing sauce for the whole dish!

I had to make the cod cakes the night before the dinner party, as it was a lot easier to cut and fry the cakes without breaking them when it was frozen.

I first cooked the potatoes in a medium stock pot until tender, and drained. While cooking the potatoes, I brought the wine, shallots, garlic, thyme, and peppercorns to a boil in a medium saucepan, added the cod trimmings, covered, steamed the fish for 5 minute, and finally drained the fish with paper towel. Then I broke down and mixed the hot potatoes and warm fish in a bowl using a fork, with adding the remaining ingredients one at a time. The final mixture was covered and refrigerated for about 1 hour.

To form the logs of cod cake, I put a large piece of plastic wrap (over a foot long) on my slightly wet marble kitchen counter, placed half of the cod mixture on the plastic, and formed into a 2-inch-wide log that is 7 to 8 inches long. After rolling the log in the plastic, I tied one end, twisted the other end tightly to compress the mixture and tied it. Then I repeated the same for the 2nd log. The logs would sit in the freezer over night. 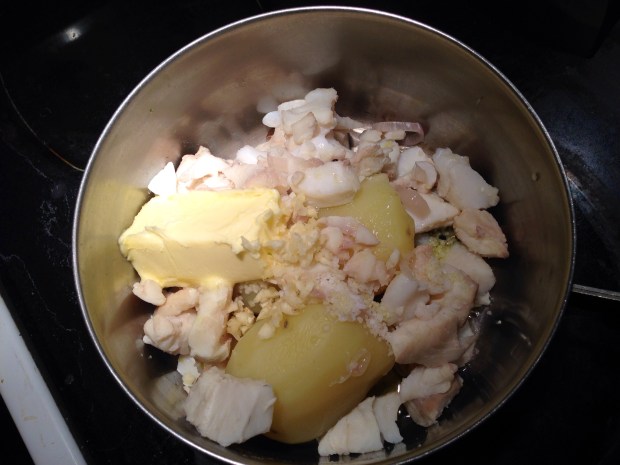 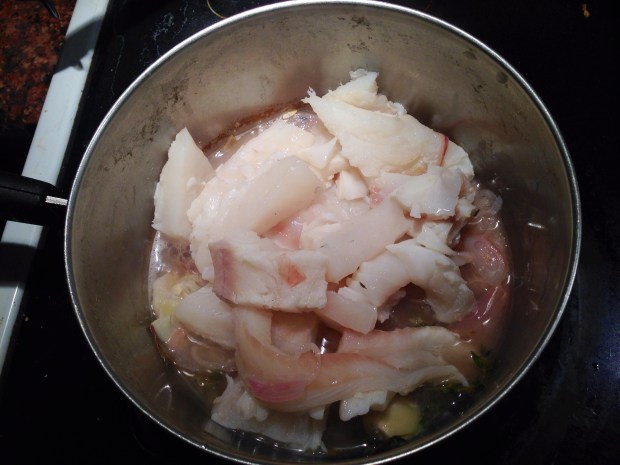 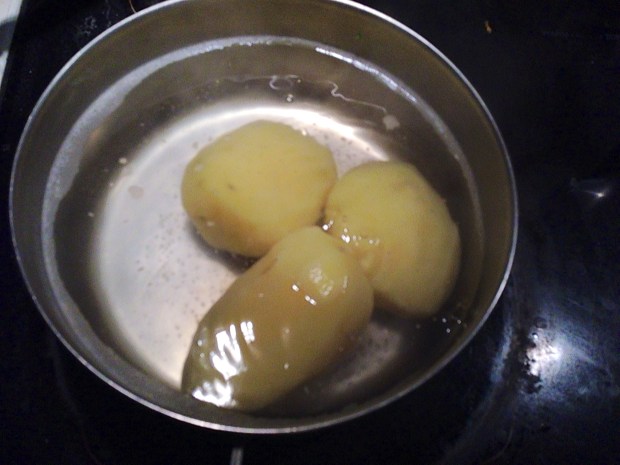 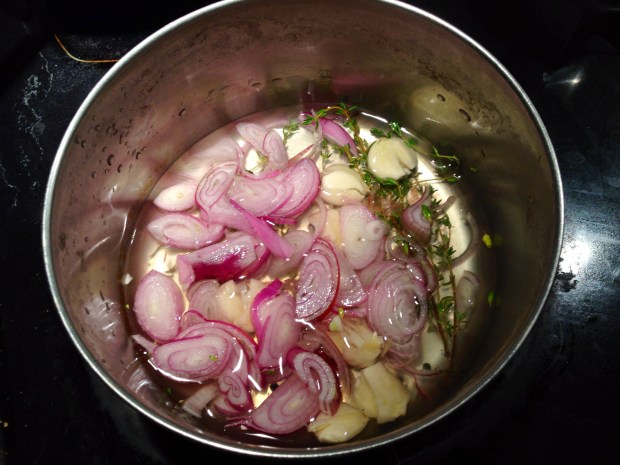 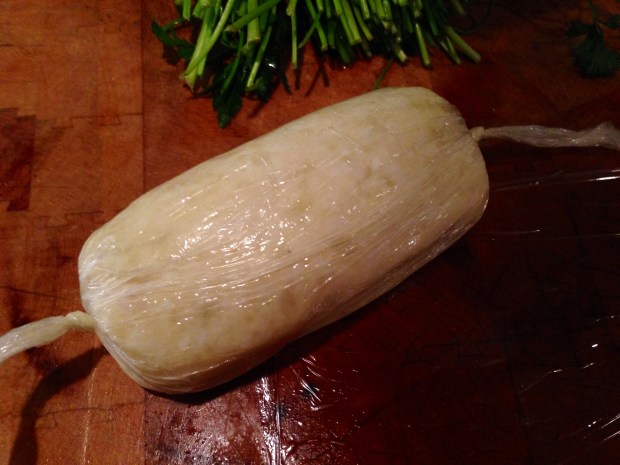 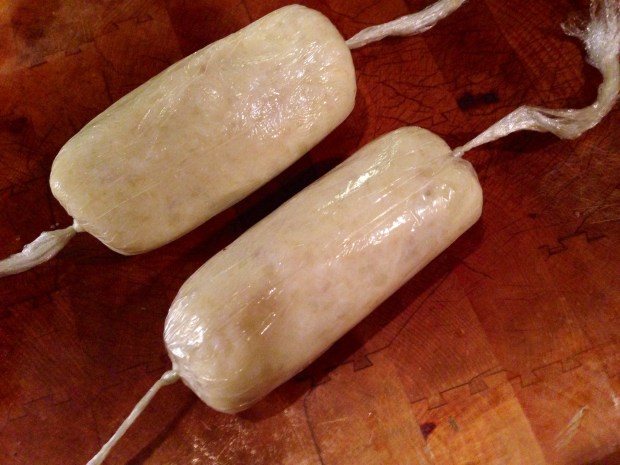 Putting the Dish Together

I first preheated the oven to 250F.

I cooked the clams in a small cooking pot with garlic, shallot, thyme, bay leaf, and wine with high heat. I removed each clam as soon as it opened. Then I strained the cooking liquid into a small saucepan, reduced it to a glaze (about 2-3 tbsp), added heavy cream and slowly reduced the sauce to about 1/2 cup.

Meanwhile, I cut the six 3/4-inch slices from one cod cake log removed from the plastic wrap, thawed them for about 15 minutes, dusted them in flour, and sautéed on high heat in a large frying pan for about 1 1/2 minutes on each side, and finished them in the oven.

Then I heated 1/4 inch of canola oil in large frying pan until hot, dusted the cod portions with flour and seasoned with salt and pepper, sautéed until golden brown, and drained on paper towel. Meanwhile, for the “chowder”, I warmed the celery, and potato cubes with guerre monte, parsley, brunoise over low heat.

To plate the dish, I put the cod over the cod cake and pour “the chowder” all over, with a piece of clam on the half shell on the side, then a tablespoon of the clam sauce and a splash of the parsley oil. 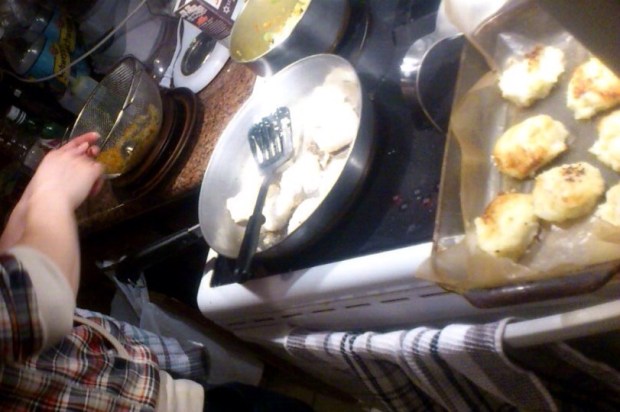 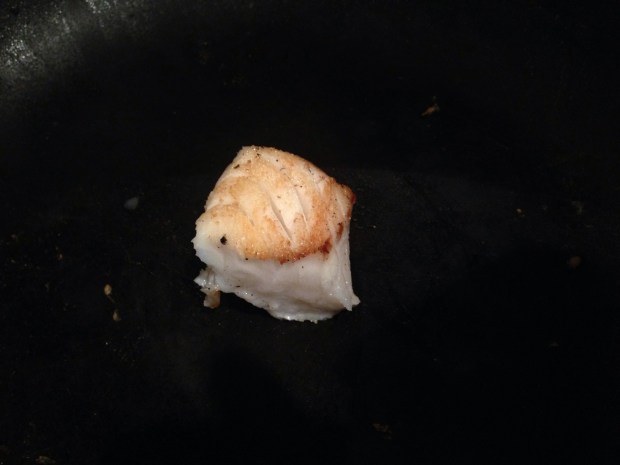 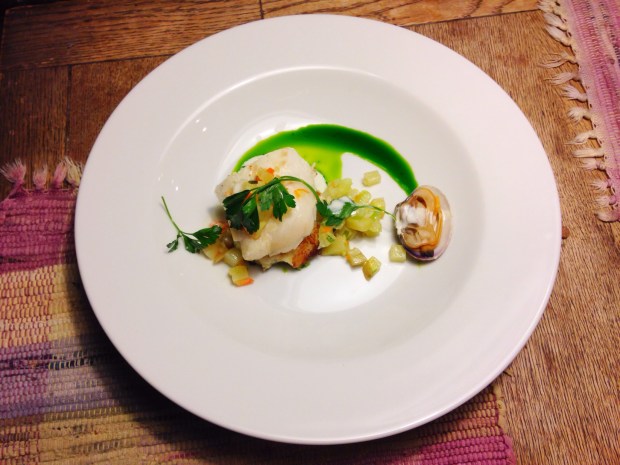 Parsley Oil, in a squeeze bottle