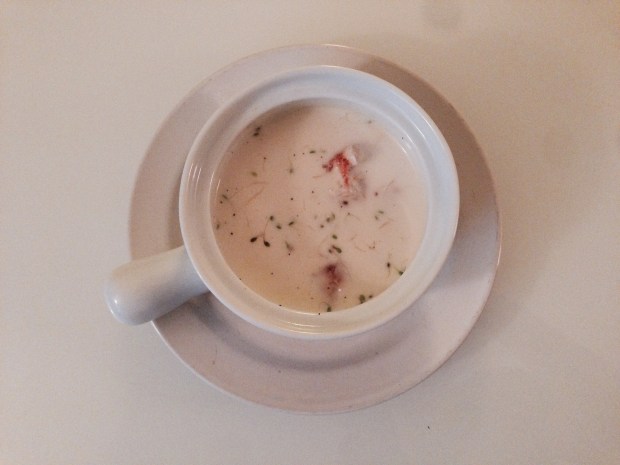 There are several recipes on cooking lobster in the cookbook, which I was instantly drawn into since I love eating lobster so much. And one big meaty lobster seems perfect for a small thanksgiving dinner for just me and my mom.

In Vancouver, there is a great supply of fresh quality lobsters shipped from atlantic provinces, which are just as good as their American cousins, the Maine lobsters used by The French Laundry. Thanks to the great demand from the local Asian population and their obsseion with seafood, live lobsters are available in most Asian supermarkets, and very reasonably priced. I bought a 2.5-lb one at the new T&T supermarket in Richmond, which only cost me $30!

Growing up in China, I only had spiny lobsters from Pacific there. As an entirely different species, spiny lobsters do not have the big claws and they are mostly all tail meat. When I was visiting Red Lobster for the very first time in California, a whole steamed Maine lobster with butter was the tastiest thing of the whole world to me, which has become one of the most delicious memories that still lives on in me.

Okay let’s get back to cooking.

I decided to cook 2 courses out of this big guy – using the body to make a Creamy Lobster Broth, which will be covered in this post, and the tail and claws for a Poached Lobster dish for the next post.

Although there are a lot of details on how to prepare live lobster in cookbook, the main goal is to steep the lobster quickly, take the meat out of lobster shell before it’s fully cooked – in this way, we will have a great control over the taste and texture of the meat. After initial preparation, lobster meat is such a versatile ingredient and you could use it in many different ways such as butter poaching, roasting, or cooked in pastry.

Here are a few tips on steeping lobster from based on both the cookbook and my experience:

I happened to have two 8-quart stock pots. Perfect!

Now it’s time to seperate the meat from the shell while the parts are still hot!

Taking out the meat is pretty straight forward – just use a large knife to carefully crack the shell first. There are a ton of videos on youtube on how to take out the tail, the claw, and the knuckle meat out of the shell.

It only took me 5 minutes to neatly take out the meat. Wait a minute… One claw is bigger than the other one! Oh well it’s not perfect world after all…

Now we need to deal with the body! Omigosh… Do I sound like I have just committed a murder.

The lobster body (which most people call the head) is the main ingredient for the broth. First I pulled out and discarded the top shell including the heads and antenna – I did such a good job that I could still see the light green tomalley intact perfectly, which explained why it was always a slimy green mess inside the body during my previous experiences, probably caused by over boiling. I removed the tomalley, lungs and other insides, and was left with the body with the little legs.

Then I rinsed the body with cold water, chopped it into quarters, and dried it with paper towels.

Next, I heated up a 8-quart stainless steel stock pot with 1 table spoon of canola oil, seared the chopped body 1-2 minutes on each side, added 1/2 cup chopped tomatoes, 1/4 cups of chopped carrots, and 1/2 bunch of fresh tarragon, filled the pot with water that just covered the body quarters and vegetables, brought it to a boil, reduced the heat and let it simmer for about 30 minutes (with constantly skimming off the impurities). Then I strained the stock, smashed the lobster body with a wooden spoon and extracted more liquid and strained again.

Oh boy this is a lot of work already… I felt like I was finally getting a taste of a true test of French cooking!

In the book the recipe uses 3 lobster bodies, and the final broth is supposed be very rich, and usually served in small cups or used for making a sauce. But I wanted to serve it in a lighter version with more liquid but still full of lobster flavours 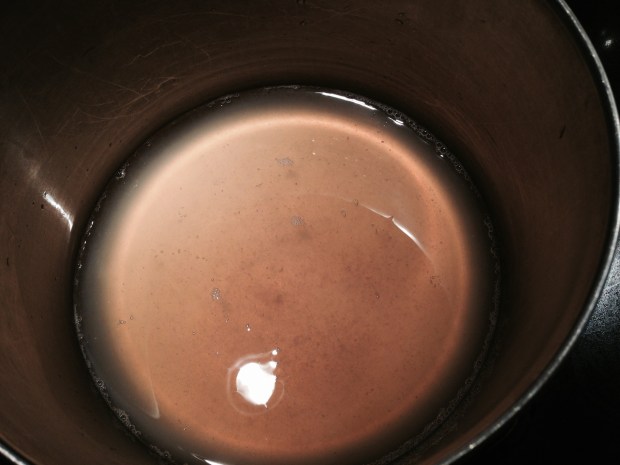 So I had about 4 cups of strained lobster stock in a sauce pan, and continued reducing it on medium low heat to about 3 cups, which took about 15 minutes. Then I added 1 cup of heavy cream, frequently stirred, and let it simmer for another 15 minutes on medium low heat. I ended up having about 3 cups of creamy broth and it was perfect for serving 2 people. I added the final touches: some ground white pepper and kosher salt to taste, all the lobster knuckle meat, and some sprouts for a refreshing touch of garnish.

The taste of the final result was amazing. I know my version is slightly watered down compared to the original recipe, but to serve in a bigger portion, it is perfect.

Now let’s move on the next course!